1:0 for GRP surface protection for steel pipes in Liechtenstein 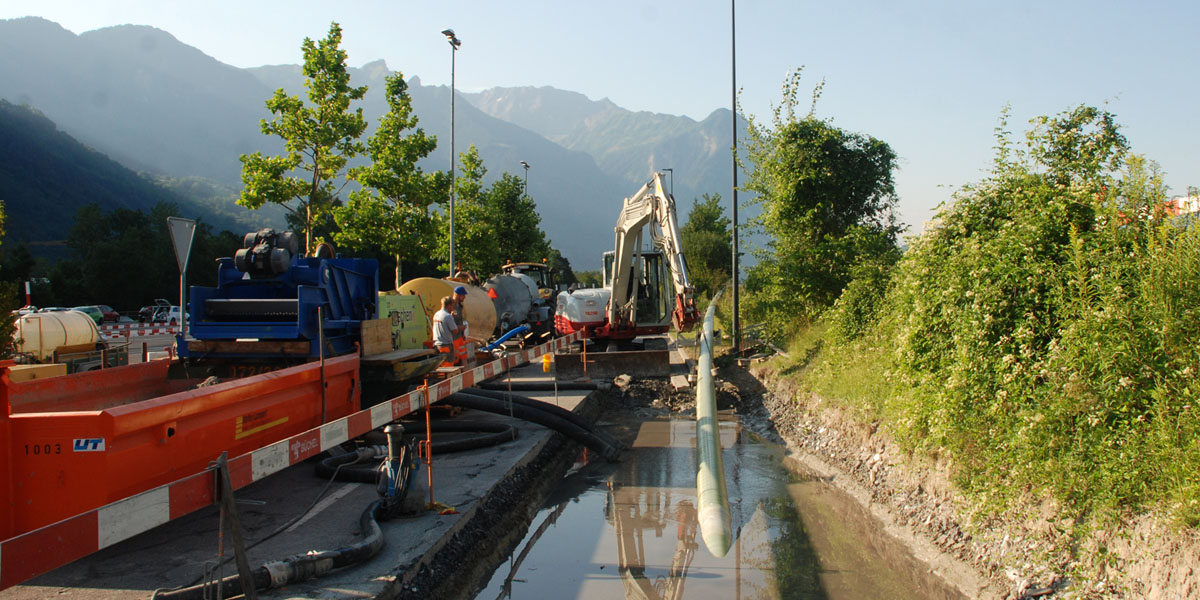 “In the worst case, it could have ended in a disaster with numerous fatalities in the sold-out Rheinpark Stadium in Vaduz”, said Bruno Broger, Technical Director of Liechtensteinische Gasversorgung (LGV). The operation of a natural gas pipeline, running right across the away supporters’ section with little cover, was a risk that was no longer acceptable. With the help of the GRP surface protection of BKP Berolina Polyester GmbH & Co. KG in Velten near Berlin, Germany, pulling in the borehole of the 656 metre long pipe without mechanical damage was completed in August 2018.

The measures, which had been required by the authorities to minimise the risk posed by the high-pressure natural gas pipe in the area of the stadium, were worked out jointly by LGV with the Liechtenstein government and the municipality of Vaduz. The existing DN 250 pipe was replaced by a new pipe with the same cross-section but, due to the potential hazard, laid underneath the dyke that separates the River Rhine from the stadium. To meet the required minimum distance of 30 metres from the Rheinpark, it was laid over 15 metres deep in the ground using the horizontal directional drilling method. Following completion of the works, the risk had been minimised significantly, the accident prevention requirements were completely fulfilled and the previously used pipe was taken out of service.
Fast working on site due to UV-light-cured resin.

The steel pipes used (material grade L360NE), which have polyethylene corrosion protection applied in the factory, are produced by Mannesmann Line Pipe GmbH in Siegen, Germany and offer greater wall thickness, strength and meet specific quality requirements. The 41 pipes, each 16 metres long, were encased with the five millimetre thick GRP surface protection in the BKP Berolina factory to provide additional mechanical protection. The welds were protected and insulated by applying a butyl rubber-based corrosion protection tape, subsequent casing with glass fibre mats in conjunction with VE resin, and curing by using artificial UV-light. This system enables fast and simple application.

BKP Berolina has over 20 years’ experience in the glass-reinforced plastic pipe surface protection. GRP, the extremely heavy-duty protection layer made of glass fibres and styrene-free vinyl ester resin, ensures maximum mechanical abrasion resistance for trenchless pipe installation. The GRP is cured by using artificial UV-light without the use of curing agents (hardeners) and accelerators.